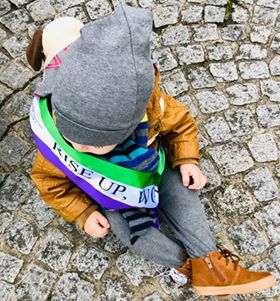 This year to mark and celebrate International Women’s day we did the Manchester Walk for Women. So babe in arms, toddler in tow and Yiannis proudly trotting a long like a rhythmic yet somewhat over loaded pack horse, we marched. Basic, I thought. No need for explanation. But, I was so surprised at just how many people asked me ‘why?’ or ‘what for?’

Well, for us (as a family) raising feminists isn’t just a gal thang. Equality means equal opportunities for all! Philanthropy, much like charity starts at home. It’s just as important that my children learn to stand side by side as it is they master the ability to stand alone.

In 100 years women have come far in their battle for equality. But, a big BUT we haven’t reached any kind of equal playing field, yet. And although, within that 100 years a lot has happened, with the passing of time also comes complacency. The topic of equality and women’s issues the world over has started to slowly fade out into the ether. We often take it for granted that the rights we do have were fought for and that if we don’t continue the debate, continue to educate our children those one hundred years of forward steps will fall back in on themselves.

And so it was we started outside Manchester’s Central Library on Saturday 2nd March. Joined by hundreds of others we Walked for Women. Making our way to the Castlefield Bowl we stomped, banged drums, whistled, chanted and sang. Celebrating with music, dancing and poetry. All of us just people, from all different walks of life united by our hopes and demands for actual equality. Simply because a balanced world is a better world.

My two year old son in all his toddler glory and inability to fathom the idea of a planet that stretches further than his doorstep, danced and played and sang without bias or fear. Ignited by the beating drums and glorious music, he waved to and clapped with anyone that would join him. Completely unaware of walls or boarders or differences of sex nor of privilege or colour.

I guess though it all really boils down to this. I hate to think of the kids living as adults in a world where they are forced to walk separate lines. Whether they wish to or not. I don’t want their generation to be debating flexi time and equality or arguing over the value of a working mother. I want these topics to be a given, to be the norm. And that’s why we, the whole family walk.

“I am brave, I am bruised
I am who I’m meant to be, this is me
Look out ’cause here I come
And I’m marching on to the beat I drum
I’m not scared to be seen
I make no apologies, this is me”