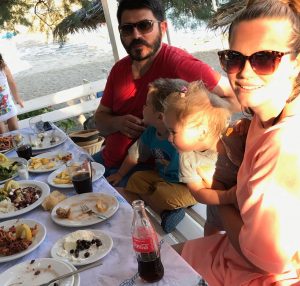 Greek Meze is pretty much the same as Tapas to the Spanish, it’s finger food! Which is why it also makes great meals for kids or weaning babies. Meze; Persian for taste or snack is a selection of small dishes served, often to a large group of family/ friends (parea). Unlike appetisers they are served continuously to accompany drinks such as raki, ouzo and wine. However, take away the alcohol and you have the perfect set up for young children taking their first steps into the exploration of food! 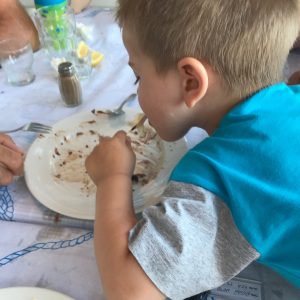 A set meal can often be over whelming for kids. Greek meze allows everyone to taste and try a little bit of everything. Taking away the pressure of having to finish an entire plate of food. it also allows you the chance to see where you children’s preferences sit. This way you can learn how to bulk out their meals and to get them to eat when they need to.

For example T loves carrots, cheese and crisp rye bread (pretty standard) but is not a fan of cucumber, eggs or rice. It doesn’t mean I stay clear of those foods, just that when I make rice (for example) I bulk it out with the stuff he likes i.e chopped carrots and topped with cheese. He’s also not very good at eating when he’s sick, which at two is always! Knowing the ‘good’ foods he likes means I can quite often get him to eat ‘something/anything’ remotely healthy no matter how poorly he is! 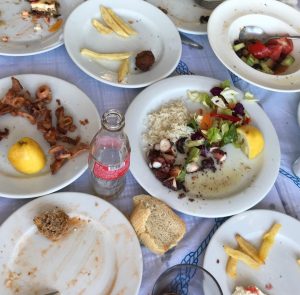 For me the key is choosing quick wins. Easy dishes that can be knocked up almost instantly and eaten just as fast!

Our families most favourite Greek meze dishes are: Corn on the cob. Yep it counts! In my kids great grandmother’s village they have a yearly kalaboki (sweetcorn) festival. So corn on the cob sits on the table all year round when we’re in Crete. 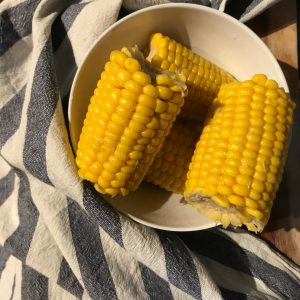 Baked bean and carrot stew. Normally done with gigantes from Ioannina, but I’ve adapted it to be more UK kid friendly. 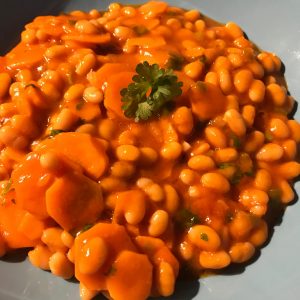 For one full plate to share amongst 4: Lightly fry your onions and garlic until golden brown, then add a single (large) sliced carrot and a 1/4 cup of water. Once the water has reduced down add a tin of baked beans. Once cooked through mix in some sliced parsley.

Dolmades. Don’t worry if these are too complicated for you to make, all supermarkets have them tinned on their ‘World Foods’ shelves. If you are feeling adventurous though don’t just stick to stuffed fine leaves, try cabbage or mine and P’s favourite stuffed courgette flowers! The greatest aspect of dolamdes is just how easily adapted they are. Often just stuffed with seasoned rice (so vegan friendly) you can also add mince meat to the mix if you wish.

Tzatziki. Normally an all time fave for most kids and a great way to up nutrition levels, especially with kids who only eat chips, bread and dip! Up the desirability and their five a day by making rainbow tzatziki. Simply add in tinned sweetcorn and grated carrot! 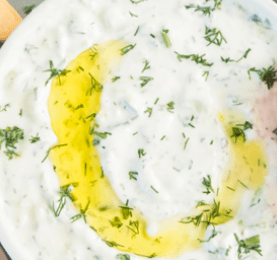 To make: finely chop two cloves of garlic and add to one grated (and drained) cucumber, mix together and add in 3 table spoons of vinegar. Allow to sit for 10 minutes so that the vinegar can slightly cook the garlic. Then mix in some full fat Greek yogurt. Our favourite is Fage by Total. To garnish (for adults) add a drizzle of olive oil and a sprinkle of chopped dill.

Olives. You’ll be surprised just how many kids absolutely love olives. Although, in my experience olives are the Greek version of marmite; you either love them or hate them! 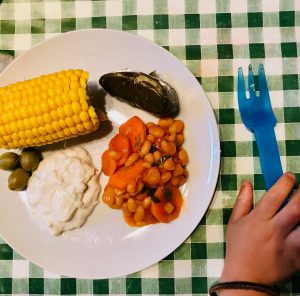 Sliced Pita. Flip it up a notch by toasting it with garlic butter and topping it with cheese.

Fasolia. Really boil the potatoes for this one so that they can be easily mashed into the tomato sauce. The key for flavour and vivid colour is to use fresh beans rather than frozen.

Fava. Boiled and then mashed split peas, served with extra virgin olive oil and diced raw onion. For kids either take the onion off completely or use finely sliced spring onions instead. 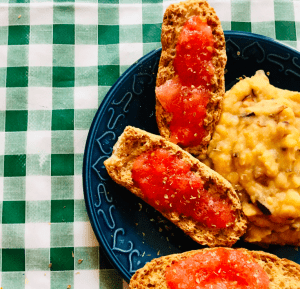 Calamari. Another great accompaniment to tzatziki, but also a big win with most the kids in our family. Try it deep fried in batter or grilled on the BBQ!

Yiaoutoulou. Sliced pita topped with grated tomato and yogurt (stop here to create a veggie option) or add some grilled meat such a kebab. 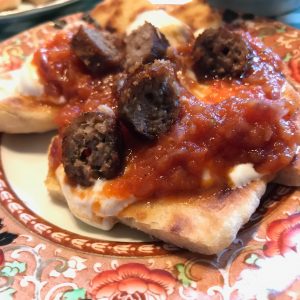 I’ve picked up a lot of my true Greek dishes from family in Greece. But, a huge amount of the food I try out on the kids comes from meal inspo on Pinterest. Or other blogs like ‘The Spruce Eats’ and their family friendly, authentic Mediterranean recipes. But, the truth is pretty much anything can be adapted to or broken down for Meze. So, just start experimenting.